SIG Sauer Rangefinder Reviews. Even saying the phrase seems a bit, off.

For decades, SIG Sauer has been one of the most trusted names in the hunting space. For handguns.

Since when did Sig Sauer get into producing hunting optics? The company has been at it for quite some time now and the products they are producing are actually pretty impressive. Since coming out with their most recent optics systems, SIG released a system they call BDX.

What does SIG Sauer BDX stand for?

BDX stands for Ballistic Data Xchange. The video below does a great job of explaining exactly what SIG BDX is. The advantage of the BDX system is that your rangefinder and your riflescope both communicate with one another. This works by glassing a target with your rangefinder and the scope creates a digital ballistics profile. Todd Helms claims that this is a very easy system to use once he had downloaded the app and created the ballistics profile within the app.

All of the information you’re going to need within the app is easily accessible both from your ammunition box, the rifle you’re using, and company websites (for things like muzzle velocity).

One of the best parts about the BDX system, when configured, is that the scope utilizes a yellow line (screenshot from video below) to show you where you need to aim, within one minute of angle. This system can be incredibly helpful in the field, as the rangefinder and your scope communicate with one another seamlessly. Recently, SIG came out with a new optic system, the SIG Sauer KILO 3000 BDX Rangefinder Binocular. This will eliminate the need for both a rangefinder and a binocular, as they’re combined. Incredibly helpful and well worth their price. 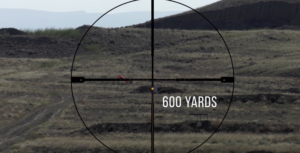 Rangefinder Binoculars – The Best Reviews For 2020

Where Do Deer Sleep?

The Best .308 Rifles Every Built

The Best Bolt Action Rifles On The Market

Where Do Deer Sleep?

ABOUT US
Range Finder Now is a website dedicated to planning a successful big game hunt, finding the best areas to hunt, and reviewing the latest hunting gear.
FOLLOW US
© Copyright 2019 | Rangefindernow.com
MORE STORIES
Best Of

Tyler @ Range Finder Now - January 13, 2020
0
The .17 HMR (Hornady Magnum Rimfire) rifle is among one of the most popular competition rifles for its ability to hit targets at extremely...